Hello everyone, after I started the Unix Commands series with the cat command yesterday I thought it would be better if I explained the man command first. The man command is totally essential for exploring usages of many things in Unix world.

First let's dive in the man commands manual by running the command: 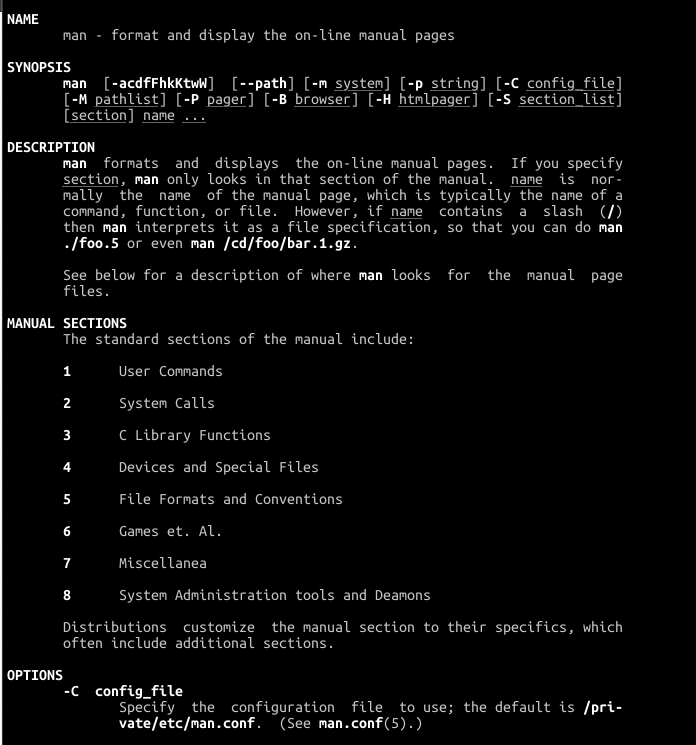 As you can see above there are many other sections in every manual, on the manual sections part we can see we can get the manuals of 8 different standards.

I'll not walk you through the each standard with examples, instead I'll explain how can you use a manual to find what you want and which part indicates what exactly.

No matter what type a manual you are looking for you can be certain about you'll see three parts.

Another thing as you can see the pictures above same name can be stand for 2 different uses, let's take chmod in hand. We have both a system call and a command called chmod, and the way of we call them also differs. By default if we don't pass any other arguments man opens the first manual for the given name. For example if we run the "man chmod" it will bring us Chmod(1) directly however if we need the system call chmod then we can simply run "man 2 chmod" which leads us the manual at picture 2.

To learn about the other appearances of same name you can take a look at the See Also section at the bottom, for example we can see chmod(2) in the see also part of chmod(1).

For the sake of readability I'll just cut this post with the parts of man command that happens to seen in every type of Unix Manual. I can however mention about other section can be seen in a manual like; Return Values, Errors, Examples, See Also, Standards, History and so on and so forth.

I hope that small guide is helpful to you and you can now explore the manual more easily.

Until next time, take care of yourselves :)