Docker is a tool that allows developers to create, deploy, and run their applications by using the power of containers. Containers provide developers all the packages and dependencies to make their application run on a sandboxed environment. Unlike a VM a container doesn't contain its own kernel, it uses the host OS's resources.

Further information about the can be found here

Quick Start with a Dockerfile

Even though it's a little bit top to bottom I'll explain docker cli commands that I found useful later.

I'm using the Docker Desktop application on MacOS but all the files and commands are independent of your way of getting Docker. You can find how can you start here

Another dependency we need is the Node on our machine.

We should create a folder and navigate into it. After the following commands need to be executed one by one.

Later we should add that line to "package.json" to go along with this tutorial

We also need to create an index.js file in the root directory with the following content:

Docker file is the most critical file for our application. And the content should look like that. 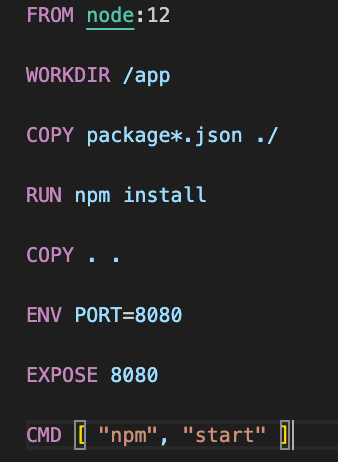 After everything is set we can create our docker image by running:

After this command is successful we can check our images by running the command docker images and the output should be something like this:

We can finally run our container by running the command:

and that's it we can interact with our app from the port we indicated with the -p flag above.

Given our index.js code output should be something like that when we open the page "http://localhost:5000/"

I hope you all enjoyed this tutorial as much as I did, see you in the more depth tutorials in the future...